Today I bring to you a bit of a tag collaboration. I was tagged for the Sunshine Blogger Tag (quite awhile ago, actually... *cough cough*) and then more recently, the Early Writings Tag. Because I don't have the time (or energy? xD) to do two posts within a decent time frame to when I was tagged, I'm combining them! 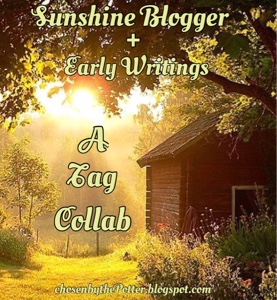 Thank you to Lisa @ Inkwell for tagging me for the Sunshine Blogger Tag!

QUESTIONS:
1. Do you have favorite fictional families/siblings and who are they?
The Keiths from A Life of Faith: Millie Keith! Sweetest family, y'all. <33

2. If you could reform one villain (book or movie) who would it be?
Hmm...I usually don't like the villains if they're, like, wicked evil. And the villains that I would like to reform usually end up getting reformed by the end of the book/movie. XD Maybe I need to read more villains?

3. If you could work with/be the apprentice of/learn from one historical figure (hero or not) who would it be?
Maybe Benjamin Franklin. :D

4. Have you ever dreamed (when you were asleep, of course) that you were in a book or movie? If so, which ones?
I probably have, but I can't think of anything right now.

5. What are you favorite kinds of book titles (e.g. one word, a reference, symbolism, with a certain word in them...)?
Usually titles with a symbolism or reference to something in the book. I love it when I'm reading and go "so that's where the title idea came from!"

6. If you could be the "sidekick" of one fictional character, who would it be?
I would love to hang out on the Circle C with Andi Carter...or roam around Pleasant Plains with Millie Keith...or explore Acktar with Leith Torren. *sneakily gave multiple answers*

7. If you were a superhero, what would be your power?
Creating stories and worlds and people and places with only the 26 letters of the English alphabet. *nods soberly* Also, speed reading. That would be epic.

8. If you entered a fictional world, what is the worst thing that could happen to you?
I could die? I could never get back to my real world? The possibilities are endless, I believe. xD

10. Which fictional character would you want as your sidekick?
Rafe Sullivan from A Question of Courage. I would end up being more his sidekick, because he would be the one starting the trouble...but, ahh well.

11. What fictional character would you want as your arch-nemesis?
...to be fair, I had to look up what 'arch-nemesis' even means. (I knew nemesis, but arch? Like, archangel? *didnt get it*) Okay, back to the question... Wait, why would I want anyone as my enemy? *makes face* *tries to think of an answer* *stares at bookshelf* I dunno, maybe Respen Felix? *pretends I haven't referenced TBoA 4697425 times already*

(I know, I know, I cheated. Forgive me if I tag people on the next one?)

Eve @ Edge of Night tagged me for the Early Writings Tag. Thanks, Eve! :D

QUESTIONS:
1) What horrendous book did you write as a child?
To be perfectly honest, I did not write a book as a wee child. I did, however, start writing a book in 8th grade. It was called The Letter in the Attic (wow, suspenseful, Faith *insert sarcasm*) and it was about two Amish girls who were cleaning one of them's attic and – surprise! – found a letter. They didn't know what the contents of the letter were and things kept happening to prohibit them from reading it.

I never finished it, and I honestly don't know how it did/would've ended. At one time, I think I'd planned for there to be a map inside the envelope (maybe along with the letter?). The girls thought it would lead them to buried treasure, but it ended up leading them to a community cemetery. (See? I was warped from a young age.) And yeah, I don't know what that would have turned out as either. :P

2) What did you learn from it?
Heh. Good question. XD

– That I can't write a mystery very well.
– That I can't do 'pantsing' without having a general idea of where I'm headed.
– That I can read and enjoy Amish fiction, but I can't write it to save my life.
– That a story needs solid character, a believable plot, and a well developed setting to be worth spending anybody's time on.
– That you should follow the saying of 'putting a bit of yourself into every story', but you also can't add random facts of your life into the book where they don't belong. (Example: one of the girls' family had two yellow labs. #shocker)
– That, chances are, you can always better your grammar... Did I mention this book was one big run-on? Or that there wasn't a single paragraph in the entire, 10-page, hand-written thing? *grimace*

"Missed a spot!" A voice from behind her said.
Thirteen year-old Rachel Miller spun around to find her best friend Beth Zook, standing at the top of the attic stairs.
"Oh, hi!" Rachel said with a sigh. "Mom had this great idea last night. 'Now that schools out for the summer' she said 'I'll expect all you kids to help with the cleaning, starting in the morning, bright and early.' And here I am."
"Enjoying every minute of it, I'll bet," Beth said. "I seen your mom already, she said you were up here."
"So what are you doing?" Rachel asked.
"Well, I thought I could help you clean up here and then we could head down to the creek and go in wading," Beth replied. "What do ya say?"
"I say yes! Absolutely!" Rachel grinned, "let's get to work!"

Four hours worth of cleaning later, two dust-covered girls were almost finished.
"This is the last one," Beth said, glancing around.
"It's looking pretty good up here," Rachel smiled. "But I'm glad we're almost done.

*points up* That's legit all I added to a document, because just typing the story up was making me gag.

To endure this embarrassment (kidding – it was kinda fun), I tag...
Micaiah @ Adventures Beyond the Horizon
Ivie @ Ivie Writes
Zane @ Simple Impossibilites
Bethany @ A Great God and Good Cocoa
Faith @ A Writer's Song

Email ThisBlogThis!Share to TwitterShare to FacebookShare to Pinterest
Labels: tag 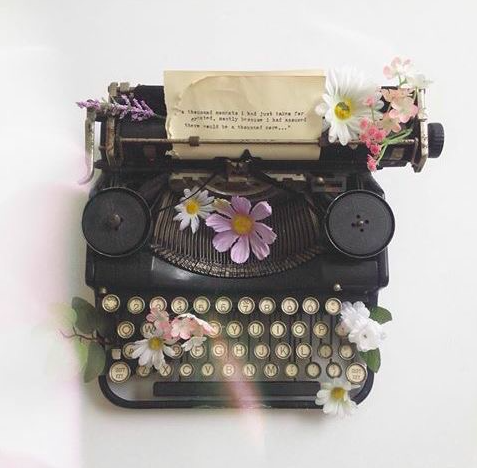 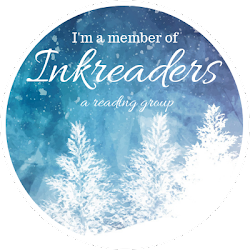